This is a computer folklore story I heard many years ago. The story illustrated the essence of technology security. I do not know how the actual story’s facts, however, the story can be told with different facts; however, the essence and outcome would be the same.

In the mid-1970s, Wang was a company in Massachusetts who fostered a computer-based word processing system. Boston legal companies hired armies of legal secretaries. The secretaries would type pages and pages of legal documents flawlessly without errors. Most legal contracts required multiple original documents for signatures. The effort required to constantly key typewriters quickly and accurately could take years to be highly skilled. A typical large law firm could have dozens of legal secretaries.

Wang’s marketing to the law firm was a simple business proposal. A Wang word processing system can replace many legal secretaries. The cost and the return made eliminating legal secretaries and easy business decision.

From the legal secretary perspective, the word processor would destroy a craft that took years to perfect. Management offered training on the new system. The secretaries revolted and walked out of the offices. When the revolt quieted, the secretaries return to their offices. Upon entering the room, all the desks, and all the typewriters were gone. At the room’s center were a desk and a word processor. Management still offered training, but only a few secretaries would have a job.

This story is a framework for security schemes that repeats over and over. Security never has full immunity from agents of change. The design, development, and use of a security system establishes an entity with characteristics.  A security entity has two sides safety and risk. Within each side, the characteristics are the targets for the change agent. The phenomena caused by the change can be benign to malicious. 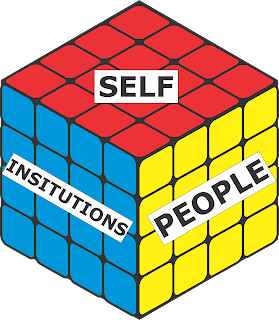 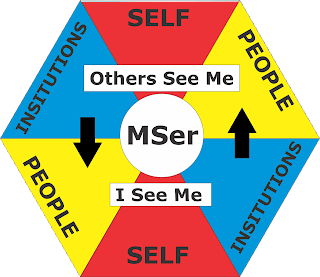 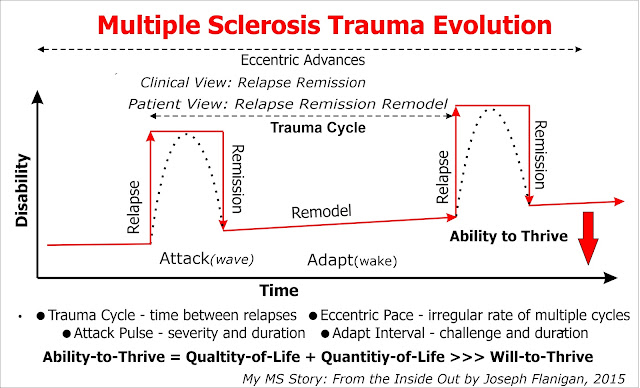 The clinical diagnostic terms replace-remitting and progressive are eccentric progressions but with different impacts and consequences. Speach is an eccentric event. Every sound utterance is a different energy wave event. Every utterance heard filters into collective modals eventually to be words. Each ocean wave and wake is a unique eccentric event yet we recognize the rising and the falling.

MS is a multi-dimensional eccentric disease. Every event is a new event.

The experience dimensions from a trauma attack event are: 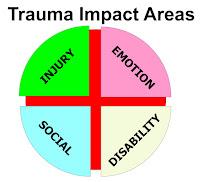 The thrive dimensions consequences from the trauma event are:

Some of the life dimensions effects from the trauma event impact are: 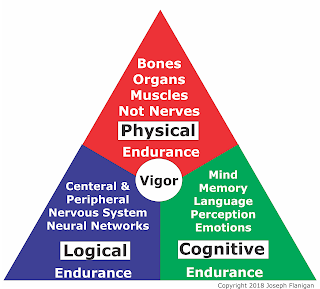 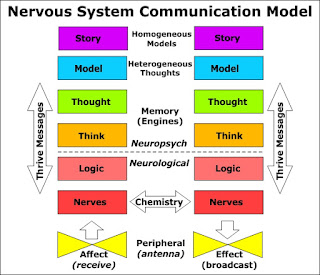 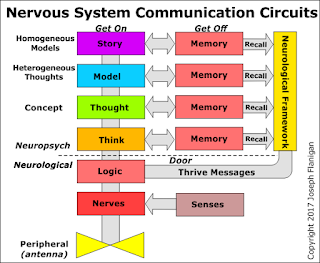 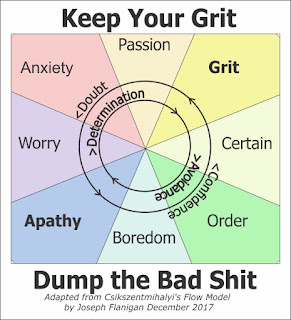 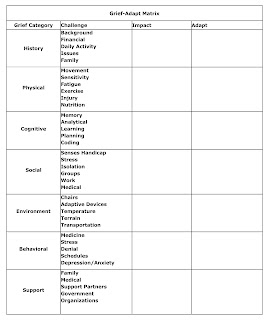 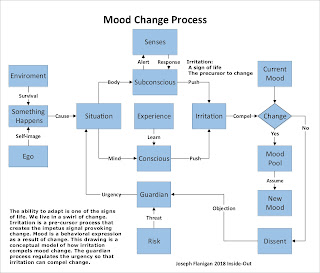 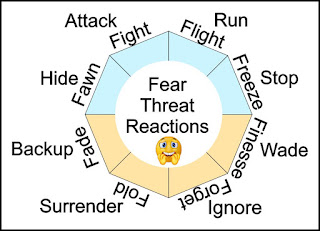 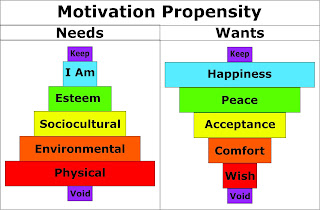 Veteran: VHA and Emergency Treatment at a non-VA facility.

Business Rules Analysis
of the VA and Constitutional Law

The Veteran's Administration denied at veteran the medical expenses for a veteran's visit to a non-VA facility emergency room. The medical reason for the visit is not relevant except to know the visit occurred as an adverse condition and the VA accepted the visit as a ligament cause.  Even though the veteran is eligible for ER treatment, the veteran may not receive benefits to pay the hospital bill.

The VA's interpretation of the law separates eligibility from the actual distribution of benefits. In other words, being eligible for benefits is not a guarantee of benefits. The word benefits is an overloaded term that has a slightly different meaning in different contexts. The rules that govern VA benefits start with Constitutional Law. The VA administration interprets the law to create Department regulations used to conduct the business operations defined by the law. Within the Department are many business operational levels, for each level the regulations require more context-specific guidelines. For each operation to operate as required by the law, the VA interprets regulations into policies. Then for the business execution of operations, the policy becomes procedures. The business implementation for the VA begins with the law, then interpretations for regulations, then the policy, the procedures. If the three levels of interpretation are accurate, a procedure must be a substantiated as a valid interpretation of the law. None of the VA documents are the Law. The VHA has created regulations that the VHA claims to be "the Law" but in fact, the documents are not the law.

The VA's use of the term benefits is confusing. However, there is a business model that is the same model as VA benefits. The Department of Veteran Affairs is one of the President's fifteen Executive Agencies. As an executive department, every agency has an account report. Standard accounting practices use journals listing entries as a named item or service with the associated cost. A journal entry is a fee for an item or service. This pairing, service, and fees, is the same pairing the VA calls benefits. An accounting journal classifies the journal entry as a valid financial report category. All classification systems impose eligibility restrictions separating items that belong to a category from those items that cannot belong in the category. The business model for an accounting item is eligible(item and cost). The VA model for benefits is the same eligible(service and fee) where service and fee are named a benefit. The VA may acknowledge a veteran is eligible for a service but procedures qualify fee allowance. The separation of services and fees by procedure control over fees complicates veteran's medical expense coverage.

The VA sent a denial that said "by law" the VA cannot pay the ER copay medical expense. Rather than accepting the denial as fact, I wanted to know what was the actual wording in the law. My understanding that by being eligible for VA benefits, the medical treatment would be covered by the VA. We did not know that the VA, before the fact, misrepresents itself about ER benefits. When the VA sends a denial, the veteran can appeal the decision. To make an appeal, the veteran must show a reason to reverse the denial. To find the appeal reason meant finding the exact part of the law the VA used a reason for the denial. As an Americal citizen for 70 years, I am embarrassed that I did not know how Constitutional Law is part of our government.

The VA has helped me and others. Sometimes a situation happens that is in conflict with a reasonable person's thinking. In the case of payouts for ER treatment at a non-VA facility, the VA created regulations not substantiated by Law.

38 USC Veteran's Benefits Chapter 38 USC 1725 Reimbursement for emergency treatment is a good business rule with one major exception, the two-year requirement for (B) the veteran received care under this chapter within the 24-month period preceding the furnishing of such emergency treatment.

The VHA has denied many many veterans with the statement "VA has no legal authority pay to a veteran’s cost shares, deductible, or copayment associated with OHI" This statement is complete bullshit. The Law states "The Secretary may not reimburse a veteran under this section, Limitations on Reimbursement, for any copayment or similar payment that the veteran owes the third party or for which the veteran is responsible under a health-plan contract." The statement prohibits the veteran from double dipping by claiming the veteran's OHI payment as a pre-paid amount by the veteran. The veteran is responsible for the health plan contract. If the health plan contract does pay some of the medical expense, the Law does not allow the veteran to include that payment for reimbursement.

Somehow, some way, somebody at the VA twisted the use of copay to mean the veteran's payout responsibility.  Copay and coinsurance mean two payer's, the insurance and the patient. The veteran's unpaid medical expense is still the responsibility of the VHA.

The Law makes it impossible for the veteran to prepay the provider. Under the Law, "establish the maximum amount payable under subsection"  sometimes called maximum allowed amount (MAA). The VHA does not provide an explanation of benefits that explains the MAA.

If the MAA is the same as the Medicare fee for a medical service, the veteran could overpay the provider. If the veteran pays the provider a fee higher than the MAA, the VA cannot by Law reimburse the overpaid amount. The VA regulations for ER treatment at a non-VA facility for MAA, EOB, and reimbursement is bullshit.

If the VA pays the provider the MAA, the payment exhausts further provider fees for the same medical service. As a veteran the most out-of-pocket expense a veteran should ever pay the provider is the MAA. Without a VHA EOB, neither the provider nor the veteran can determine the correct invoice or payout. The absence of a VHA EOB is the stinkweed in the bullshit.

Perhaps the worse pile of bullshit is the VHA breach of its judiciary trust on the Goodwill Grant. If a veteran has a private health plan contract for medical insurance, The Goodwill Grant is the veteran's volunteered permission of the veteran's private health insurance for VA's direct cost recovery at VA facilities. 38 U.S. Code § 1729 - Recovery by the United States of the cost of certain care and services. The Goodwill Grant does not give the VHA permission to use the terms of private insurance with other providers. Because the Goodwill Grant has terms for copay and deductibles, the VHA uses its knowledge of the terms to demand the provide insurance EOB from the provider. This demand is bureautic extortion refusing to pay without an EOB. The provider has the legal responsibility to reconcile other party payouts before invoicing the VA.