Sometimes when I am cycling, I think about 1961, I was 11 years old, and the two years I delivered The Denver Post newspaper near our home in Aurora, Colorado. I remember Mr. Colten, the Denver Post paperboy manager, and my job of delivering the Denver Post every day. Every afternoon and Sunday morning to pick up the papers, for my route,  I would ride my bike about a mile and a half to a converted garage called the newspaper shack. Inside, attached to the walls, were folding benches. The Denver Post truck would drop bundles of papers off at the newspaper shack where the boys would unbundle and count out the number of papers for their routes. Carrying the stack, they would go to their assigned folding bench, fold, rubber band and load the papers into the bike bags. Often there was a race to see who was fastest. Once loaded, each boy road to their route. A good route was 50 papers. Canvas bags wrapped around the extra-wide handlebars. The bags were the same as the over the head shoulder bags the walking paperboy's bags where one bag hung in the front and one bag hung in the back. When Mr. Colten gave a new boy his bags, the other boys helped to cut one shoulder strap in half. The bags draped over the handlebars, one bag hung on each side of the front wheel.  Ends of the cut strap attached to the handlebar end with a hose clamp to keep the canvas tight to the bar.  The last step was to wrap bags around the handlebar ready to be unwrapped and filled with the day's newspaper. 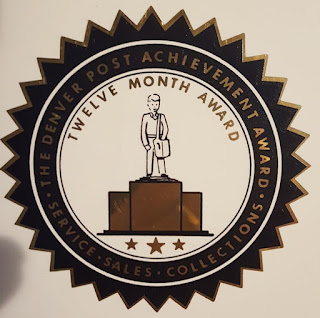 Delivering papers was just part of the job. We would solicit subscriptions from people moving into our routes, watch for people moving out and do monthly door to door collections -hoping for a small tip. That was tough work but it did not seem so hard at the time. If the weather was rain, snow, hot or clear, every day the paper had to be delivered. There were no days off. When our family went on vacation, I would have to trade days with another boy in exchange for doing each other's routes  On those days, to do both routes, it meant two loads and two trips to the newspaper shack. Helping each other out by riding a double route was just part of being a newspaper boy.

The bikes were heavy, and the bags hang off the handlebars full of newspapers made the bikes heavier and unstable. The bikes always needed some repair, flat tires, new tires, bent wheels. We had to learn to be our own bike mechanic. Of course, any repair cost came out of our part of the collections. In the winter, hats, gloves, coats and boots had to be in good repair. The first year I rode was on a  bike Dad got from another news paperboy. The bike was well used, but I delivered papers with it for a year and saved my money to buy a new Schwinn.

Sometimes on Sunday morning, if it was snowing, Dad would take the 55 Chevy station wagon and drive me to the newspaper shack. I would fold and rubber band each paper and load the papers in the back of the wagon. After arriving at the route and dropping the tailgate, sometimes sitting, I could throw the paper and hit the porch.  But, because of the snow, I would grab an armful of papers and run zigzag down the street, making sure the papers would be dry. Sometimes the paper would have to be put behind the screen door. Dad was pretty good about helping me, but I can still hear Mom saying, "Harry, you have to help Joseph with the papers this morning or we will be late for mass."

When I mentioned being a newspaper boy did not seem like hard work, most likely that notion came from being on a farm until I was 7, before we moved to Denver. We still had family on farms, and visits always included chores. I remember my father and my uncle milking cows. My grandfather out in the field plowing or mowing. Grandma took care of the house, cooked and raised chickens. Everybody make sure the animals had care, water, and feed. Twice a day, every day the cows had to be brought in from the pasture, feed and milked. Riding a bicycle was fun. However, doing the paperboy work was riding just part of the chores. Our family was poor, but we knew how to work. Mom took care of us five kids. Often Dad had two jobs, sometimes 3. He was good at painting houses. During the day, Dad worked as a janitor, and at night he painted houses for realtors. Many nights after paper delivery, Dad would say “Grab some supper, I need help painting.” Of course, I knew what he meant. While dad painted, I did the sweeping, hauling trash, scrubbing, pulling tarps, moving ladders, cleaning brushes. That is just the way it was, complaints were meaningless and got in the way of getting the job done.

When I talk to pro bicycle racers, I can look them straight in the face and claim I was a pro cyclist at 11. Every day, in all kinds of weather, we road for money, delivering papers in a timed race.

In 1954 we still lived on our farm in Nebraska. The house sat about a quarter-mile off the gravel country road. The driveway to the house was a dirt road. May 12th was my 5th birthday. I never expected much for presents. About mid-morning Mom and Dad walked me out the front door. Sitting in the driveway was the most beautiful site – a red bicycle with white training wheels.  Before long, I could ride that bike all over the farm. But, never ever on the county road. In 1956, we moved to Denver. The red bicycle sold at the farm auction.

After my newspaper boy days, I went on to motorcycles and cars. Forty-six years later and 19 years of living with MS once again, bicycles came into my life. The first ride was 10 feet before falling. Getting back up, then it was 30 feet. And again, a little more each time. My memory recalled that red bicycle and all those newspaper boy days. Eventually, confidence recalled the riding skill that was never lost.